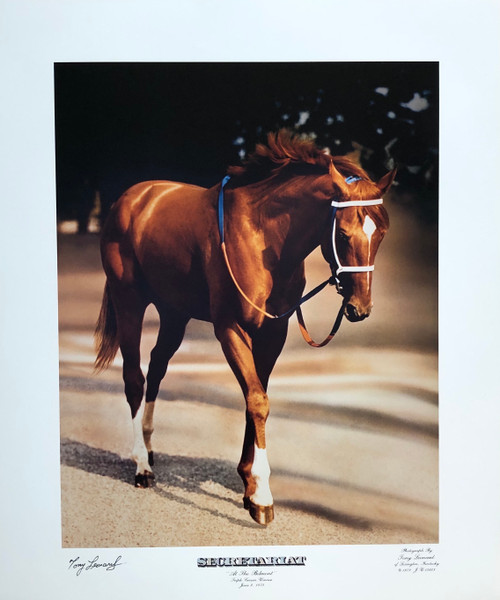 When Secretariat won the Belmont on June 9th 1973, he became the first horse to win the elusive Triple Crown since it was done by Citation in 1948.  The whole world stood still as announcer Chic Anderson yelled "Secretariat is alone.  He is moving line a tremendous machine!"  Secretariat was completely alone as he crossed the finish line 31 lengths ahead of the closest horse.  As the thrill settled in, everyone realized that Secretariat had just set the track record at the Belmont Stakes, after doing so earlier in the year at the Kentucky Derby and the Preakness.  Those records still stand at those tracks till this day.

This print is hand signed by former world renowned photographer Tony Leonard.  This picture was taken by Tony before the race that day.

Secretariat "At The Belmont" Signed and Numbered

Secretariat "At The Belmont" Signed and Numbered